WA elections are only weeks away…folks are already submitting their mail-in ballots. Voting YES on 522!, Washington state’s  initiative measure requiring labeling of genetically engineered foods, seeds and seed products is CRUCIAL for our personal health, for generations that follow, and the environment. 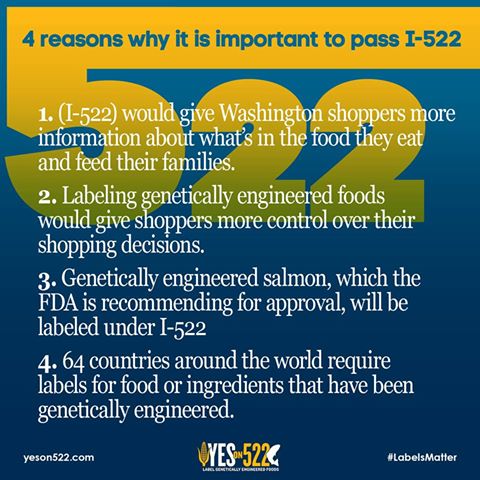 TV and radio airwaves, printed election materials, newspapers and magazines plus web resources are being flooded with misleading information about I-YesOn522 and GE / GMO ingredients, hiding or denying the life-threatening, chronic, health dangers already affecting the people and livestock being fed these altered foods.

Leave a comment to request an emailed copy of the Swanson Report (PDF) on frightening information from the Center For Disease Control stats and graphed trends on Americans’ deteriorating health, since GE / GMO crops and widespread use of glyphosate (Monsanto’s ‘RoundUp’ weed killer) have been introduced into agriculture.

A frustrated YesOn522 volunteer, who contacted me to participate in WA voter education phone banking, declared after seeing the onslaught of misinformation in the voting literature: “Feel like I’ve come to a gunfight with a butter knife!” 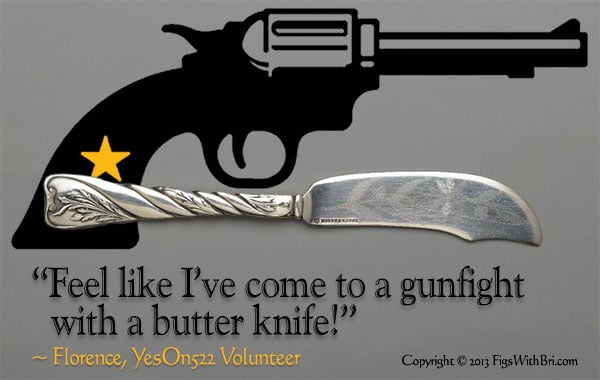 Label GMO Consumers Have A Major Advantage: The Tipping Point

Don’t be dismayed. Consumers really do have the power in our hands. Use your YesOn522 vote and buying power to choose. Refuse to buy GE / GMO containing products, which means until we have labeling….buying exclusively organic and Non-GMO Certified foods and products. By doing this, we will reach ‘the tipping point’ making products containing GE / GMO ingredients a liability.

In the health food industry there is already a clear trend, according to several sources (ie. Jeffrey Smith of the Institute For Responsible Technology, the CEO of Whole Foods, and others): Product sales INCREASE by 15-30% once they’re labeled as GMO-Free or Non-GMO Certified.

If you’re still feeling confused by it all…
Check out YesOn522.com to get your questions answered. 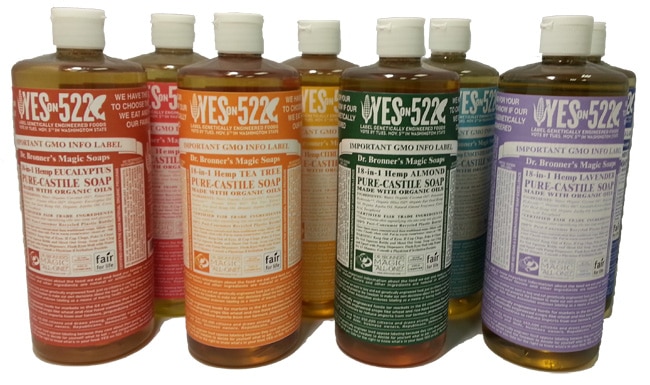 Here are YouTube videos that tell it like it is (and I’m sure you can find more):

Washington voters and consumers need to realize the ‘NO’ campaign is deliberately impeding your Right To Know What’s In Our Food by spending MILLIONS !! to confuse voters to defeat YesOn522.

Dirty Laundry: Who Has Something to Hide from YesOn522 Voters?

“The main goal of a lobbying organization like GMA is to pool the massive resources of its members, which include heavy hitters such as Coca-Cola, PepsiCo, and General Mills; each has a huge stake in this fight. While last year in California, these companies donated millions to stop Proposition 37, this year, the game plan has changed. GMA is now doing industry’s dirty work by donating on behalf of its members and possibly violating Washington State’s lobbying rules in the process.” (Read more)

GMA is functioning as cover for packaged food manufacturers, who want to avoid customer backlash for their unpopular stand against our consumer rights.

In recent weeks, a Washington non-profit ‘Moms For Labeling’ filed a suit accusing GMA of not properly disclosing the whopping $7 million-plus in campaign funds the trade group has donated to the No on 522 campaign so far. In a court dismissal, the Moms lost their case and were penalized $10,000 plus prosecuting attorney’s fees, but now WA Attorney General has filed a similar suit against GMA’s illegal activities.

According to Food Democracy Now!  “In an incredible development for GMO labeling supporters in Washington state and across the U.S., today [October 16, 2013] the Washington State Attorney General, Bob Ferguson, filed a suit against this junk food mafia via the Grocery Manufacturers Association (GMA), the junk food lobbying group that has already plowed in more than $7.2 million to defeat Yes on 522, Washington’s GMO labeling initiative, and is now accused of illegally hiding donations from America’s largest food companies.

The Washington Attorney General’s office alleges that the GMA set up a secret fund within the DC based lobbying group to illegally launder campaign donations to defeat GMO labeling in Washington in order to protect brands such as Pepsi, Kraft, Kellogg’s, Coke and General Mills from consumer backlash!” (Read more)

Don’t be fooled by these greedy corporations. Take ownership of Your Right to Know. If YOU are a Washington VOTER: Please Vote YES! On 522 ~ Label GMOs